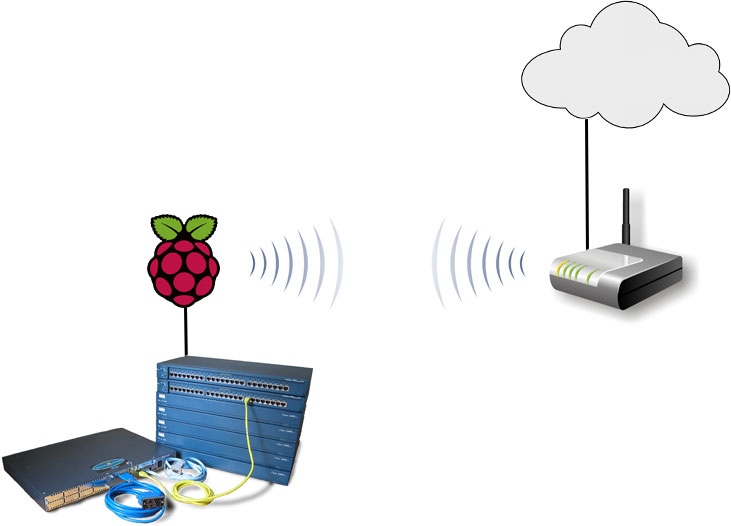 Raspberry Pis are small single-board computers which use Linux as their officially supported operating system. Because they're *nix systems and "I know this!," they can be used as low-power servers and even forward packets between their Ethernet and wireless interfaces. This makes them perfect for connecting a home lab to the internet using WiFi when running cable isn't possible. Using NAT and VNC, they can also be used to provide a lab internet access through a captive portal.

I recommend using Raspbian especially if you require using VNC but most Pi distributions should work as well. This guide uses Raspbian Jessie with Pixel. Since there are already plenty of installation guides on the internet, I wont go into the details here. However, a good place to start is the Raspberry Pi Foundation's image installation guide.

After installation, use the sudo raspi-config command to expand the filesystem and configure basic settings such as disabling the graphical desktop, changing the keyboard layout, and enabling SSH.

To configure settings for connecting to a wireless network, you'll need to edit the /etc/wpa_supplicant/wpa_supplicant.conf file with your favorite text editor.

At the bottom of the file, add one of the following network entries

For more a more in depth guide on how to configure wireless, refer to the Raspberry Pi Foundation's Wireless CLI documentation.

Next, we'll set a static IP on the ethernet interface. You can do this by adding the following to the bottom of the /etc/dhcpcd.conf configuration file. Substitute your values as needed.

To configure the Pi to route packets it receives on one interface and send it out another, IP forwarding will need to be enabled. Once again, you'll need to edit a config file. Using sudo nano /etc/sysctl.conf, uncomment the following line as shown below.

Using NAT eliminates the need to add a route on the next hop router which points back to network(s) behind the Pi. This guide shows the more universal solution of using a Many to 1 NAT but depending on what you are trying to do, you may opt to configure this differently.

To make your iptables rules survive a reboot, you'll want to install the iptables-persistent using the following commands. During the installation, you'll be prompted to save your current rules.

If you require VNC continue with the next steps, otherwise reboot your Pi with sudo reboot and go take a break before setting up the rest of your lab.

Using captive portals require users to logon or accept an agreement before they are allowed to access the internet. While I'm sure a way exists to accept an agreement or logon automatically, an easier solution would be to do it using the Pi's web browser. You can do this by connecting the Pi to a display or using VNC. In Raspbian Jessie the builtin RealVNC Server and Viewer makes setting this up easy.

Because you'll likely be running your Pi headless (without a graphical display) you'll want to start a virtual desktop. This is done by simply running the vncserver command in the console terminal. After that is done, you can connect to the Pi using a VNC Viewer such as RealVNC's VNC Viewer by connecting to the Pi's internal IP address appended by :1 in the connection settings.

Then add the following lines:

After saving the file, enable it with the following command then reboot the Pi with sudo reboot and test it out!